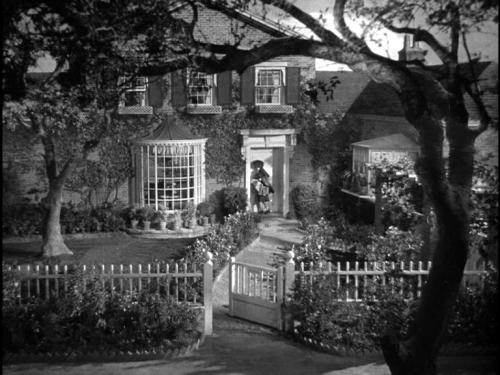 “… And there was the square itself, with the leaves still as thick on the trees as they had been when she left in August; but in August they had hung heavily, a uniform dull green, whereas now, crisped and brindled by the first few nights of frost, they had taken on a new, various beauty. Stepping lightly and quickly down the square, Mrs. Miniver suddenly understood why she was enjoying the forties so much better than she had enjoyed the thirties: it was the difference between August and October, between the heaviness of late summer and the sparkle of early autumn, between the ending of an old phase and the beginning of a fresh one.

She reached her doorstep. The key turned sweetly in the lock. That was the kind of thing one remembered about a house: not the size of the rooms or the colour of the walls, but the feel of door-handles and light-switches, the shape and texture of the banister-rail under one’s palm; minute tactual intimacies, whose resumption was the essence of coming home.

Upstairs in the drawing-room there was a small bright fire of logs, yet the sunshine that flooded in through the open windows had real warmth in it. It was perfect: she felt suspended between summer and winter, savouring the best of them both. She unwrapped the chrysanthemums and arranged them in a square glass jar, between herself and the light, so that the sun shone through them. They were the big mop-headed kind, burgundy-coloured, with curled petals; their beauty was noble, architectural; and as for their scent, she thought as she buried her nose in the nearest of them, it was a pure distillation of her mood, a quintessence of all that she found gay and intoxicating and astringent about the weather, the circumstances, her own age, and the season of the year. Oh, yes, October certainly suited her best. ..

…She rearranged the fire a little, mostly for the pleasure of handling the fluted steel poker, and then sat down by it. Tea was already laid: there were honey sandwiches, brandy-snaps, and the small ratafia biscuits; and there would, she knew, be crumpets. Three new library books lay virginally on the fender-stool their bright paper wrappers unsullied by subscriber’s hand. The clock on the mantelpiece chimed, very softly and precisely, five times. A tug hooted from the river. A sudden breeze brought the sharp tang of a bonfire in a the window. The jigsaw was almost complete, but there was still one piece missing. And then, from the other end of the square, came the familiar sound of the Wednesday barrel-organ, playing, with a hundred apocryphal trills and arpeggios, the “Blue Danube” waltz. And Mrs. Miniver, with a little sigh of contentment, rang for tea.”