Don’t have any eggs, shortening or 30 minutes to devote to making a cake? Cockeyed Cake doesn’t even require a mixer and is a very thrifty recipe.

The I Hate to Cook Book

This recipe comes from the Peg Bracken’s 1960 “The I Hate to Cook Book”. As you can see from the photo, my copy is quite worn, but it’s one of my favorite cookbooks because it blends good, dependable recipes with humor and clever illustrations. It’s very mid-century, so if you like this era, I highly recommend this book.

When I was in grade school at Mingo (and when school cafeterias actually cooked instead of the way they do it now – just reheating frozen food), the cafeteria ladies made this cake but they called it Wacky Cake. This is what Peg says on pages 91-92 and will give you an idea about her writing style, which I find very amusing:

“This is a famous recipe, I believe, but I haven’t the faintest idea who invented it. I saw it in a newspaper years ago, meant to clip it, didn’t, and finally bumped into the cake itself in the apartment of a friend of mine. It was dark, rich, moist, and chocolatey, and she said it took no more than five minutes to mix it up. So I tried it, and, oddly enough, mine, too, was dark, rich, moist and chocolatey. My own timing was five and a half minutes, but that includes looking for the vinegar.)

Put your sifted flour back in the sifter, add to it the cocoa, soda, sugar and salt, and sift this right into a greased square cake pan, about 9x9x2 inches. Now you make three grooves, or holes, in this dry mixture. Into one, pour the oil; into the next the vinegar; into the next the vanilla. Now pour the cold water over it all. You’ll feel like you’re making mud pies now, but beat it with a spoon until it’s nearly smooth and you can’t see the flour. Bake it at 350 degrees for half an hour.”

1.While cake is baking, place butter in mixing bowl to allow to come to room temperature.
2. Sift powdered sugar, salt and cocoa together.
3. Add most of the milk and vanilla. Blend well.
4. Mix in chopped pecans.
5. Place on warm, not hot, cake and allow to soften a bit before icing.

Cake Notes:
*At the bottom of this post I’ll include the amounts for a double recipe, which is what I usually make. Realizing that anyone can double the above amounts, I have gotten myself in trouble on other recipes by forgetting to double some of them. It’s so much easier to have it all written down.
*Even though she says you can mix it in the cake pan itself, I find it difficult to do. If you are proficient at it, go ahead, it will save you having to wash a bowl.
*A few years ago, I read that one should only grease the bottom of a cake pan, because an ungreased side gives the cake something to cling to and rise nicely. So that’s what I’ve down ever since and it’s never caused a problem. Just run a knife around the edge of the pan before serving to loosen it.
*The picture below doesn’t do justice to the cake. It’s a really nice, chocolatey cake, just as Peg said.

Icing Notes
*The Mingo School cafeteria ladies didn’t ice the cake, they simply sifted powdered sugar over the cake. This works fine if you’re serving all of it immediately, but the next day it absorbs some of the oil from the cake and begins to look tired.
*This is my standard icing recipe that I learned from my mother. I never measure the ingredients, but I did today for this post.
* Baking time is subject to the vagaries of your own oven. This morning it took an extra 30 minutes. There must be something wrong with my thermostat. Just keep checking it after 30 minutes and use the toothpick test.
*Once I used cream in the icing recipe instead of milk and really didn’t care for the result. It stayed way too soft for me.
*The milk requirement in the icing is variable. Too much and it will be runny, too little and it will tear up the cake when you try to spread it. After adding the initial amount, mix it up and add only 1 T. at a time.
*Don’t put the sifter in the sink after you use it. You might need to add more powdered sugar if the icing is too thin. This has happened to me many times.
*This is a good recipe if you have a vegan in your family. Just use vegetable shortening (instead of butter) and water (instead of milk) in the icing recipe. 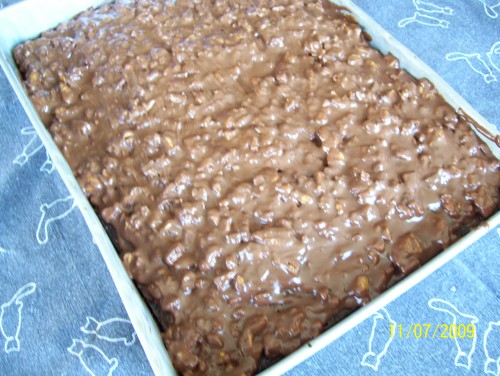 This post is linked to:
Food on Fridays @ annkroeker
Frugal Fridays @ Life as Mom

*Updated October 28, 2012: a reader (Peg) pointed out that I had doubled the amount of cocoa in the half recipe. That has been corrected, and I sincerely hope it didn’t cause any trouble for anyone. The Wacky Cake recipe that our cafeteria ladies made was indeed more chocolatey than this one from the I Hate to Cook Book, but I doubt it was twice as chocolatey.

Filed under 1960's, Books, Cookbooks, Cooking, Mingo, Oklahoma, Thrift, Using What You Have