Things have been pretty quiet around my blog for a few days, but not quiet around our lives. My sister came down from the way below freezing temperatures of Oklahoma to the way below freezing temperatures of north Texas so we could go to the rubber stamp convention in Grapevine. Ouch. We moved here 27 years ago and I don’t ever remember it being this cold. Out here in the country it’s been down to 10 degrees F, maybe lower. NE Oklahoma still has a lot of snow from before Christmas.

We had reservations for a couple of classes on Friday, one on Belts and Buckles in card making and the other was making fossil type objects from a crafting compound. There was also going to be an ATC (artist trading cards) contest and swap. So on Thursday night we worked on ATCs, and again on Friday morning before we left for the classes. 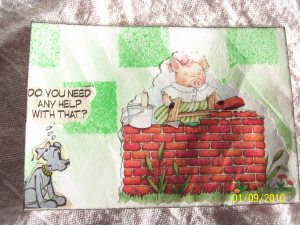 The classes were fun. Fran graciously paid for both of us. She’s taken lots of different paper crafting classes over the years. I’m the cheap sister and I’ve only gone to one other, so it was nice.

When our phone rang early on Saturday morning and Joe saw on the caller i.d. that it was my brother, I knew it wouldn’t be good news. Our mother had fallen a couple of hours earlier and broken her right hip and had been taken to the hospital from the nursing home. In March 2008, she had fallen and broken her left hip and collar-bone and had healed amazing well for a woman over 90 years old.

So Frances packed up earlier than planned and went back to Oklahoma to be with our mother (they live in the same small town). She asked me to take her ATC cards and submit them to the contest and swap. We did but not one single other person showed up for the swap. I gave a couple of cards to some women who were interested, and bought some stuff for Frances (she had given me an envelope of money to buy “interesting stuff” for her).

Joe helped me shop for her, which was fun. Maybe I can post photos of the items later.

Fran made it back to Oklahoma okay (it was snowing there again).

My brother told me that Mama came through the surgery just fine, but that the break was worse than the previous one.

When it rains, it pours. One thing I forgot to mention was that 3rd and 4th gears had gone out of the transmission on our second car and it was in the shop, so I’ve been afoot. And Isuzu has a really bad design key design on their ’91 pickups, a very narrow place which tends to break off in the ignition; our older son was using the truck and it broke off on him this week. This is the second time in 4 years.

Our son got the key out of the ignition without damaging it (Hallelujah – last time it ended up costing a bundle to replace the tumbler).

Today we’ll pick up the car and then go get a couple of loads of wood. Our wood stove has been consuming mass quantities of oak and whatever else we’ve had available.

But first Joe needs to sharpen the chain saw and put the chain back on.

And we’re having computer woes again, so this afternoon I’ll have to try to upload photos onto the laptop until the pc is up and running again. I took pictures of all the ATCs we made. **Update on the update: I posted them above.

I’m ready for a quiet Monday.

Thanks be to our Father in heaven who sustains us!