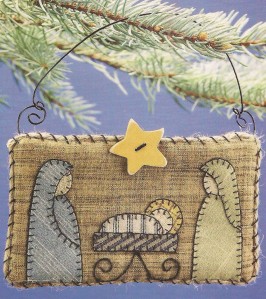 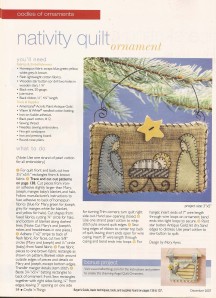 The pattern was on a page with lots of other images, which I edited out. Therefore, the original instructions to enlarge to 200% is probably wrong, unless the intent is to make a wall hanging rather than an ornament.

This 1963 issue is one of several vintage Christmas magazines I bought for .50 each at a thrift shop in Watertown, New York. I had gone there with our older son; it was a really junky store and I probably wouldn’t have gone if I hadn’t been with him.

But I am so glad that I did! It was a real treasure trove and the prices were excellent. They even had a table of free books out on the sidewalk. 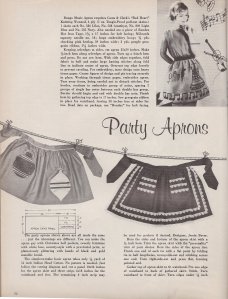 These are mostly Christmas aprons, but check out that Bongo Music Apron in the upper right corner. Just the thing for a cool, retro party. 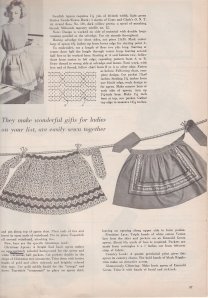 As a quick look around our home will tell you, I love to read. Books, magazines, old letters, vintage catalogs (!), clipped articles, and yes, even cereal boxes. When I go to the antique mall or a garage sale, rarely do I buy anything that isn’t printed. Occasionally a pretty dish or a doll. Maybe a vintage article of clothing or old sewing supplies.

More often, my treasure sack contains various types of ephemera: old sewing patterns, a pattern catalog from the 1950s, a 16 Magazine from 1965, Needlecraft Magazine from 1932, a very well-worn elementary reader from the 1930s, a slim WWII volume: This is the Navy, a 1960 Montgomery Ward catalog, the little booklet/catalog that came with Barbie dolls in 1962, an old drama script, a handmade wedding album from the Depression, old high school and college yearbooks, cookbooks, paper dolls (!), school room ephemera (the seasonal cardboard cut-outs that teachers used to decorate their door with). Let’s pause and take a breath. (And yes, I know I ended that sentence with a preposition. It just didn’t sound right when I used “with which”.)

I just love the printed word.

However, not all printed words.

A few weeks ago Joe and I went to the Grapevine Public Library to see what offerings were in the Friends of the Library nook. These are items which have been donated to them, which they can’t keep and they will let you take them home for a donation to their funds.

One of the employees was re-stocking the shelves and I asked her if they had any donations which were too tattered to put out and that would go straight to the paper recycler. I explained that I like to do paper crafts and find it very difficult to tear up a book to use for projects (and I can never alter one that I liked). I explained the caveat that the books cannot be prurient, even for crafting. Can you just imagine a collaged piece from a Harold Robbins book?! Yikes!

(As a Fawlty Towers fan, I first typed Harold Robinson, then caught myself and corrected it. I think the Waldorf Salad episode was my favorite one.)

Anyway, she said that they had just received a large donation (I’m guessing several hundred books), most of which wouldn’t sell and that I could go into the office and look at them and see if there was anything I liked.

She showed me the Jalna series of books by Mazo de la Roche. The Jalna books were a popular series, the first of which was written in 1927. The lady told me that they would not sell.

Also there was the World War II collection by Winston Churchill, missing one volume.

On and on it went. I ended up with 41 books in my stack, knowing that only a few would end up as craft material. One slightly unpleasant aspect of all of it was the pricing. These were books without a price tag. Buyers are expected to come up with what they think is reasonable and fair. My general rule of thumb is a garage sale price. Magazines are a dime, children’s books and paperbacks a quarter and hardbacks .50 unless in very bad condition. But she wasn’t happy with my offer of $20.00.

My plans are to read the Jalna series this summer, then perhaps start on the Churchill books this fall (they are huge – over 700 pages each; the usual goal of 1 book per week will collapse with those).

Many of the others are simply old novels. Maybe I’ll read them and then be willing to tear out the pages. But maybe not. 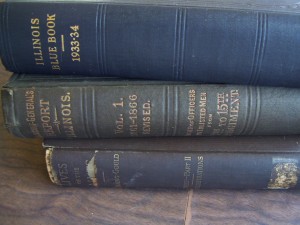 Three of them were old looking and when I read the titles I thought, “Surely I won’t mind tearing these up.”

Then we got them home and I really looked at them (I didn’t spend the time to look them over carefully while at the library).

One of belongs in a genealogy department because it’s an 1886 list of Illinois Civil War veterans, which includes their dates of service and promotions. Scratch this one from the scrap heap.

The next one is an 1898 volume called “The Lives of the Saints”. Even though we aren’t Catholic, a saint is a saint and my husband is particularly interested in St. Theresa of Avila, who is chapter one. Scratch this one from the scrap heap.

The last really old looking one was called the Illinois Blue Book, 1933-34. It was a state government book published in 1933. Alright! Here was one that I could use! A lot of cool looking photos of state officials and lists of government projects … and then right in the center is this gorgeous section of photos and drawings of the “Century of Progress Exposition 1833 – 1933, Held at Chicago, May 27 to Nov. 12, 1933”. 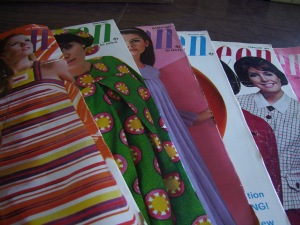 And ebay? Ebay?? Someone save me from ebay. (However, I just got the bid on the most fantastic bundle of 1965 and 1967 Seventeen magazines. I’ll share the photos with you later.)