Mingo School didn’t provide regular art class for grades Kindergarten – 4th grade. However we did lots of in-class art projects and one of my favorite things were the Lincoln and Washington silhouettes we made every February.

I’ve searched the internet and can’t find the old patterns, but there is one in a craft book that I have. Although it’s not exactly the same pattern, it’s close.

This one has been traced out of the book, then copied to 200%.

Here are some simple directions.

1. Click on image once to enlarge. Print.
2. Cut outside shape with scissors. Use an exacto knife to cut out inner collar shape.
3. Trace onto black construction paper (or black scrapbook paper if you want it to last ).
4. Using a glue stick or similar product, affix construction paper to thin card stock or the shiny side of a cereal or cracker box (this is free chipboard).
5. Cut out, remembering to use an exacto knife for the collar.
6. Use a black stamp pad, marker or crayon to color edges (so the chipboard doesn’t show).
4. If you want the Gettysburg address for a background, copy and paste it from the previous post, using a script font. Print. Or you can use plain white paper, an old book page or anything else you like for the background.
5. Using a glue stick, affix Gettysburg Address to the shiny side of a cereal box and cut into a 5 1/2″ x 8 1/2″ size (half of a regular sheet of typing paper).
6. Distress edges of script page with black or brown stamp pad.
7. Punch 2 holes at top of scripted shape. Run brown twine or black ribbon or any other type cording you prefer through holes and tie a knot on each side.
8. Glue black silhouette onto front.
9. If you like, you can stamp or print off:

10. Cut out, glue onto a small piece of black paper, and then glue under silhouette at bottom of page.

Sihouette was copied from Holiday Touches for the Country Home, 1990 Leisure Arts.

This post is linked to Frugal Fridays @ Life as Mom.

H.T. Webster was an editorial cartoonist and his most famous drawing was reprinted in the Tulsa Tribune newspaper every February 12. He drew it in 1918 when he was worked for Associated Newspapers. It’s titled “Hardin County- 1809”.

“Nuthin’ a tall, nuthin’ a tall ‘cept for a new baby down’t Tom Lincoln’s. Nuthin’ ever happens out here.”

Abraham Lincoln was a beloved president when I was a child. He and George Washington were acknowledged as the two greatest presidents in our American history.

They were given a place of honor in our history books and schools. At Mingo School, our 7th grade class was assigned by Mrs. Sappington to memorize the Gettysburg Address. Unfortunately, I only got about 3/4 to memory.

Are public school children still given that assignment? Do they even know about the Gettysburg Address? Somehow, I imagine home schooled children all across the country today are at least reading it.

On November 19, 1863
“Four score and seven years ago our fathers brought forth on this continent, a new nation, conceived in Liberty, and dedicated to the proposition that all men are created equal.

Now we are engaged in a great civil war, testing whether that nation, or any nation so conceived and so dedicated, can long endure. We are met on a great battle-field of that war. We have come to dedicate a portion of that field, as a final resting place for those who here gave their lives that that nation might live. It is altogether fitting and proper that we should do this.

But, in a larger sense, we can not dedicate — we can not consecrate — we can not hallow — this ground. The brave men, living and dead, who struggled here, have consecrated it, far above our poor power to add or detract. The world will little note, nor long remember what we say here, but it can never forget what they did here. It is for us the living, rather, to be dedicated here to the unfinished work which they who fought here have thus far so nobly advanced. It is rather for us to be here dedicated to the great task remaining before us — that from these honored dead we take increased devotion to that cause for which they gave the last full measure of devotion — that we here highly resolve that these dead shall not have died in vain — that this nation, under God, shall have a new birth of freedom — and that government of the people, by the people, for the people, shall not perish from the earth.”

The occasion was the dedication of the Soldiers’ National Cemetery at Gettysburg where just less than 5 months previously 165, 620 men of the Union and Confederate armies fought. On that Pennsylvania field, 7,863 American men lost their lives during the 3 day battle. The wounded count was 27, 224, captured and missing: 11,199.

The day following the dedication, the Chicago Times, a newspaper run by Democrats, published the following comment:
“”The cheek of every American must tingle with shame as he reads the silly, flat and dishwatery utterances of the man who has to be pointed out to intelligent foreigners as the President of the United States.”

Political cartoonists, in the north, viciously portrayed him as an ape.

In his lifetime, he was both loved and despised. 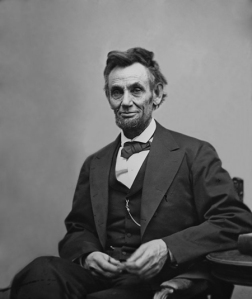 With the weight of the war on his shoulders, he posed for this portrait on April 10, 1865.

Four days later he was killed by an assassin’s bullet.

Abraham Lincoln honorably led our country in a time of incredible divisiveness and hatred among our people. He did the difficult but right thing in putting an end to slavery.

I honor his memory.

Apparently, Google does not. They chose to commemorate the winter olympics on their homepage today instead of Abraham Lincoln’s birthday.

They’re young, maybe stupid and most likely socialists. Perhaps they don’t know who he was or that what we owe him. Maybe they’re only familiar with what’s happening now. But then again, maybe it’s just their values system.