This morning we had our first fire in the wood stove for this season and it reminded me of this photo that Joe took of Princess Gracie Allen.

This little fellow is General Gilbert LaFayette, who seemed to appear out of nowhere about 3 months ago. I heard Petey barking like crazy out in the yard and when I looked out, there was this little orange and white kitten sitting out in our fenced yard, scared to death. Unfortunately, Petey set the tone for their relationship, because once Lafayette became tame enough for Joe to get him into the house, he now lords it over the dog. He was named Lafayette not because I’m a francophile (I’m not), but because we have a theme running here, which will be obvious in a minute and with that little patch of orange on his face, he looks insouciantly French. All he needs is a little black beret.

On the bed with Gracie, is Benjamin Franklin, aka Benny. Our son found him in the parking garage of his apartment in Houston last year. Benny had been out there almost a week before being adopted by our family (thereby giving his owner a chance to take him inside. Houston is not the safest environment for either cats or personal property.) His fiance was allergic to cats, so he gave Benny to us before they got married. 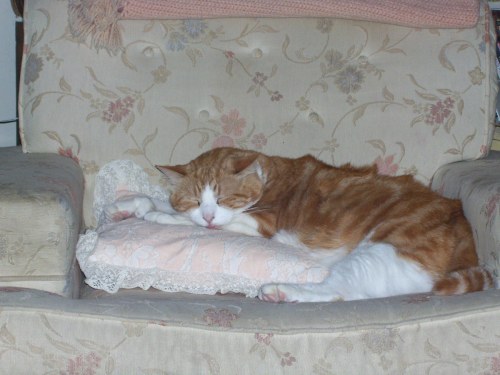 Thomas Jefferson belongs to our older son, but has been staying with us quite awhile. We went to Watertown, New York to get him before our son was deployed 4 years ago. Tommy handles air travel pretty well. He is a Hemingway (Polydactyl cat) – he has an extra toe on each of his front paws. It looks like he’s always wearing mittens, beautiful white mittens.

Outside we have Baby (a feral cat who was living at the Whataburger in Decatur). He has tamed up a lot, but only comes in the house when it’s really cold weather. Not often in north Texas, but a few times during the winter.

Also outside is a huge, gentle fellow. His name is actually Pumpkin, but we call him Punky. His brother was Pepper, a beautiful brown tabby who started staying away more and more, then just disappeared. I miss him a lot.

Martha Washington died about a year ago. She’s the only one we’ve lost on the road. We live on a dead end country road with a speed limit of 20 m.p.h. Obviously someone was going a lot faster than that. She was very, very beautiful and tiny, never weighing 3 pounds. Martha was also a Hemingway and a distant cousin of Tommy’s. However, she hated him with a passion, which is why our son gave her to us when she was a kitten. She would attack poor Tommy. Poor Tommy weighs about 20 pounds. Friendly to us and tolerant of the other cats, but she would stalk him. In fact, I thought he had a cataract grown over his eye, but the vet said it was damage; and I’ll bet she was the culprit. Even with all that I miss her. Her fur was as soft as eiderdown and she loved us, but had she lived we would have had to keep her outside and away from Thomas. It was like a vendetta. 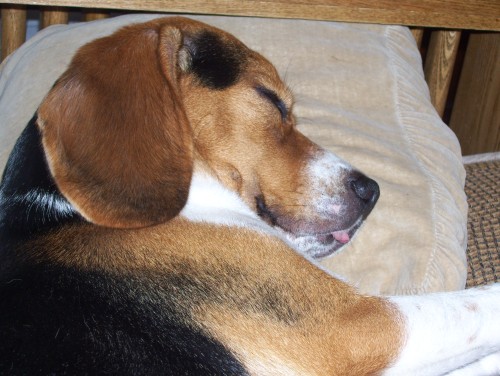 Looks like he’s giving his opinion of cats, doesn’t it. He is Peter Parker (named by our grandson who is wild about Spiderman.) He suffers the cats, but not always in silence.

The beagle can’t be trusted.