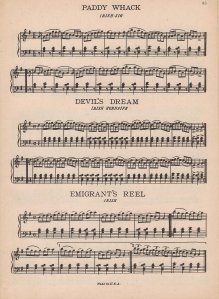 Jigs are folk dances and the accompanying music. Go here for more information

Reels are folk dances; Irish reels are defined by the time (as in 4/4). It’s much more complicated than that and if you want further information, click here.

Go here for The Bells of Shandon.

The Bells of Shandon 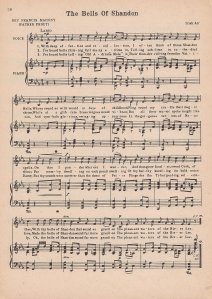 Go here for the music to Londonderry Air.

The origin of this tune is shrouded in mystery, although there are several theories (as is the case whenever historians get involved in anything). I first knew it as Danny Boy, but those lyrics are 20th century. Then in Mingo Glee Club we learned the traditional words under the title “Londonderry Air”. Apparently, it first appeared in print in 1855, after being submitted by Miss Jane Ross, who was taking down traditional Irish folk tunes and heard this one from an itinerant fiddler in the county of Londonderry.

Go here for the music to Killarney.