Having just read Persuasion by Jane Austen, I’m particularly interested in the details of that era. Today at the library I was able to check out several non-fiction books about her and early 19th century historical details.

However, this post features selections from my own copy of John Peacock’s broad treatise on fashion history.

These illustrations only roughly represent her years. She lived from 1775 to 1817; the pictures are for fashions from 1785 to 1820. Since Miss Austen completed the rough draft of Persuasion in 1817, her stylish characters would’ve worn dresses from the last sketch below.

(Clicking on a picture will enlarge it.)

Also, please note that they are intended to show the progression and details of fashion development. I think it helps to see how styles can sometimes ease from one to another. Other times they change radically.

Sketches are from John Peacock’s book: Costume 1066 – 1966, A Complete Guide to English Costume Design and History (copyrighted 1986). Mr. Peacock was the senior costume designer for BBC Television when the book was printed.

The calligraphy is by Rachel Yallop.

In years past, I’ve read Pride and Prejudice, Mansfield Park, and Northanger Abbey. Her other books (Emma, Persuasion and Sense and Sensibility) I’m familiar with only through films.

But this summer, I’m in kind of a Jane Austen mood, and so am attempting to read the volumes I’ve neglected and possibly re-read the others. I decided to begin with Persuasion.
Grapevine Public Library has several different copies, and I was pleased to find that one is annotated and illustrated.

Front of the bookmark

One of the drawbacks of reading on my own (not in a bookclub) is the inability to share and explore with others the joys and frustrations of a story or an author or a subject. The annotations relieve this somewhat.

Oh, how I’d love to be in a Cozy Bookclub.

With nice cups of tea and biscuits.

Back of the bookmark

For now I will have to content myself with my hand-made Jane Austen bookmark and lots of sidenotes. 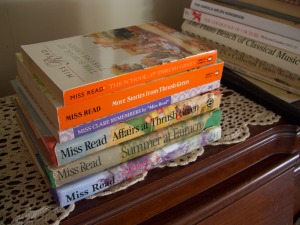 This idea came from Brenda’s post at Coffee, Tea, Books and Me. She got the idea from Sarah, at Thoroughly Alive.

How enjoyable to read another person’s list of favorite authors or books! When visiting in others’ homes, I’m always interested to see what’s on their bookshelf. Does it tell us anything about people to see what they read? Probably. Actually, I’m sure it does.

Several years ago our younger son (an adult at the time) told us that his friends were offended at the books in our living room. I doubt he was referring to the craft, gardening or music books. Surely he meant the ones on conservative politics and Christianity.

It seems that I’m always searching for someone who likes the same books that I love, because I so want to discuss them. However, I don’t think I have one single friend that shares an interest in very many of my favorite books or authors.

It’s funny because when I find a friend who likes to read, we seldom read the same books, even though we might have lots of other things in common. My friend, Patti, is a dedicated Christian, likes antiques and stories of the old days, tea cups, family history, card making and scrapbooking and southern gospel music. We share all of those things.

However, she also likes talk shows, loves country music (this one still has me shaking my head because she’s from New Jersey and I’m from the south. If it’s country and it’s not Johnny Cash or Patsy Cline, I’m probably not happy); Patti can’t stand Sara Palin and Dick Cheny (I love them both). She voted for Ralph Nadar and likes Mitt Romney. If they were the only choices, I’d be staying home on election day.

So, despite the fact that we’re both voracious readers, Patti and I rarely read or enjoy the same books. The only 2 exceptions I can think of (yes, yes, I know… of which I can think or something like that) are “

Same Kind of Different as Me

I really love the idea of a book club, but my ideal would be a cozy book group or at least a cozy mystery one.

A few words about authors
I love Miss Read’s books so much that I probably should’ve listed her twice.

And even though I’ve enjoyed the writings of Jan Karon and John Grisham, they’re missing from this list for different reasons. Even though parts of the Mitford books are wonderful, and I think that Karon is a very talented writer, there are parts of her books that I really don’t like. And I disliked her

so badly that I didn’t get past the first chapter. I intensely dislike whining (it’s one of my own and unloveliest traits) and that book is one big whine.

Up until about 5 years ago I had read about everything that John Grisham had written. In fact,

is one of my all time favorite books. So, he would be on my B list, along with Jan Karon, Harper Lee, D.E. Stevenson and several others. 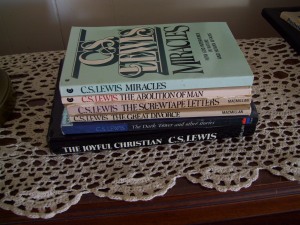 If I were less truthful, I’d list C.S. Lewis because I have tremendous respect for his work, but his works are so hard to read. Countless times, I’ve started reading Mere Christianity or The Screwtape Letters, then give up when the going gets deep. But I hope someday to read not only them, but also other volumes of his that I’ve collected over the years.

And Charles Dickens: I’ve read parts of A Christmas Carol, Oliver Twist, The Old Curiosity Shop and a considerable part of David Copperfield. The only one of his that I’ve actually finished was Bleak House. My interest was piqued in the story after I began watching the BBC version. The book was incredibly better.

Dickens was an amazing writer.