Mamosa, my blogging friend over at Eyes on the Prize, just tagged me to name 10 random things about myself and pass it on to 10 others. The goal is for us to all get to know each other better.

Seems to me that I’m a rather transparent, simple person and that anyone who talks with me for a few minutes or reads some of my posts will probably be pretty familiar with me. But I’ll try. 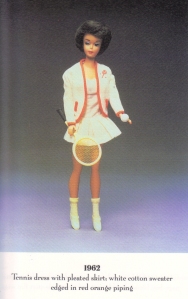 1. Vintage Barbie dolls, 1958-1964 are one of my favorite things. They bring back very pleasant memories just looking at them. Mine was a 1962 brunette bubble-cut (I call it the Jackie Kennedy hairstyle) which came with a red mailot bathing suit and black high heels. Alas, I no longer have mine, but a few years ago I paid way too much for a replacement original at a doll shop in Fort Worth. Playing with Barbies did not scar me or make me feel inadequate.

2. The Drama Department was one of two main things that kept me in high school (the other reason I stayed was that my brother had dropped out and my mother never got over it. I couldn’t do that to her.) Norma Davis was a wonderful, kind Christian teacher who really helped me by giving me a chance to blossom when I discovered my love of theater. Auditions can be really scary things and I chickened out at the door when I was a sophomore. But in my junior and senior years I got the lead in the class plays and won the Best Actress awards for both years. Over the years, I’ve only done a few community theater shows and one at the junior college, but just walking into a live theater gives me a rush. There’s nothing like walking around on a stage, either empty or a fully dressed set. The atmosphere, the smell, the magic. Ahhh.

https://www.wyndhamhotels.com/content/dam/property-images/en-us/gr/us/tx/galveston/18122/18122_exterior_view_1.jpg?crop=3000:2000;*,*&downsize=1800:*
3. Galveston is my favorite place in Texas. Of course the water is nicer in Corpus Christi and obviously it is touristy and I know that men in Italian suits (you know what I mean) used to do a lot of business there. But it’s tropical, affordable, historical (until the 1900 hurricane it was the largest city in Texas), beautiful, reachable (only 6 hours away by car) and fun. Not for me the luxury resorts in foreign places. Nothing beats staying at the Galvez Hotel (built in 1911), eating breakfast in the dining room (with beautifully appointed settings on starched, white table cloths), walking on the beach, feeding the seagulls, going to one of the many museums, eating seafood at Gaido’s, and mostly just driving along the seawall with the windows down.

4. With only a couple of exceptions, I have sewn my own curtains during our 36 years of marriage and also made a lot of clothes. But I have never put in a zipper and have a lot of trouble with sleeves and collars. Patterns need to be simple for me. It would be better if I would actually learn to sew better because I’ve always been hard to fit. I’m tall (about 5’10) and it’s not easy finding things that fit correctly.

5. I’m passionate about not being in social drinking situations. My father became an alcoholic when I was a young teenager and nothing good ever comes of drinking too much. Nothing. That said, I don’t think drinking alcohol is wrong or evil, but excess is and I know very few people who stop at one drink. Alcohol could be a real problem for me because I love the taste of champagne and Tecate beer, but I limit it to one or less and very rarely have any. For goodness sake, I’m 55 years old and can’t quit biting my fingernails – how good would I be at having to give up something really difficult?

6. My politics have come full circle, or at least my political affiliations have. The Watergate hearings were going strong when I registered to vote. My daddy and his family were yellow dog Democrats, in fact a good way for my dad to get mad and start cussing was for a Republican to be on television. But watching the hearings, I was absolutely appalled at the way the Democrats were acting – they were like witches dancing naked in the moonlight. So, I registered Republican. A few years later, I re-registered Democrat but always voted for who I thought was the best candidate and have never voted for a pro-abortion candidate. Unfortunately, Jimmy Carter was my selection in 1976, but I voted for Ronald Reagan both times. It was Bill Clinton who drove me back into the arms of the Republican party.

7. Long straight hair and little or no make-up were the styles when I was young and it’s not been easy to leave that behind. For years I almost never wore any make-up, and now I only do when going to town, and not always then. But I no longer have the glow of youth (walking by a mirror or a plate glass window is like a Halloween scare); a little powder and mascara sure help polish me up. My hairstyling skills are almost as good as my sewing, and I don’t know what to do with my hair and I’m way too cheap to get it done often. Mostly I wear a pony-tail, about every year or 2 getting it cut into a short page boy… it’s probably time for my annual trip to Pro-Cuts.

8. Raised in the Southern Baptist Church,I became charismatic in my teens. I love the SBC but some things about it irritate me. The ‘moderates’ went way too far, but some of the conservatives have swung back too far (even more conservative than the Bible and that’s not right). It feels so familiar and at home when we attend one, but then I start to feel like I need to hide the scriptural things I believe, and that’s just not right. So, we don’t know what to do. We are between churches right now and I would so love to have a church home where we can worship, share, learn and fellowship.

9. I used to have a very good memory (my husband does not think this is a good thing). Maybe it was memorizing those scripts (by the time opening night rolls around, one usually knows not only their lines but everyone else’s as well). I can remember what I was wearing when, and sometimes what someone else was wearing and describe the outfits. Trivial Pursuit is one of my favorite games but I don’t get to play very often. I am a wealth of useless information (the Battle of Hastings was 1066; don’t ask why I remember this or what it has to do with anything). My memory is not as sharp as it used to be, and since my mother has Alzheimer’s, this concerns me a little.

I don’t know 10 other bloggers very well, but I will post here later the ones that I’m tagging. Some bloggers have Tag Free/Award Free Zones and I don’t want to make anyone uncomfortable.