Plymouth and Nearby Environs

When I was a girl, I always loved the stories about the Pilgrims and the early years of America. History was one of my favorite subjects, but there was something really special and American about the story of the people who left their home in search of religious freedom, came across the ocean in a crowded boat and made new lives for themselves and their families in a wilderness.

Three years ago, I accompanied Joe on a business trip to Massachusetts and was so excited to finally get to visit the place I had read about 40 years ago. And although I had plenty of time to explore the Plymouth area, unfortunately many of the sites are closed in December, but I visited what I could. One of my first stops was Pilgrim Hall, the museum established and built in 1824. 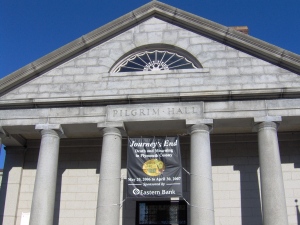 Pilgrim Hall - I call it the Politcally Correct Palace

After about 5 minutes I felt like I’d been slapped in the face and that the museum curators were trying to kick the wind out of me. There was no honor of the Pilgrims, no celebration of their experience. All of the plaques describing the paintings and artifacts sneeringly contradicted the traditional story. What was left was how awful all this intrusion was to the Indians and how noble they were.

It was politically correct to the Nth, nauseating degree. I couldn’t believe it. They kept emphasizing that all those stories we read before were false; of course that was before the enlightened ones starting writing the history books.

(A few years before that we’d been to the Smithsonian and I was absolutely shocked at how PC it was. The exhibit on World War II was overwhelmingly focused on the Japanese internment. What little space that was devoted to the American GI was negative. It described that everywhere our soldiers went, there was rape, venereal disease and unwanted, half-American children.)

(I had better cover myself here because I don’t have a lawyer on retainer – the following is my opinion. Liberals tend to be sensitive and lawsuit happy.)A rhetorical question:are the same jaded, hair-shirt-wearing, self-flagellating, over-educated nincompoops in charge of all the museums dedicated to the American experience?

Please, say it isn’t so. 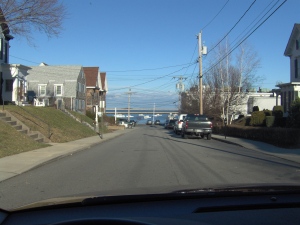 View of the bay, Plymouth, Massachusetts

Plymouth, Massachusetts has an incredibly precious heritage. Is that what you’ll find on their webpage? No, you’ll find one of those boxes on the left that shouts: “No Place for Hate”. What does that mean? Do they actually believe that other American towns advocate the opposite? The only reference to their role in American history is the following from City of Plymouth official website which says: “Most Americans are familiar with the story of the pilgrims’ voyage across the Atlantic aboard the Mayflower, and their landing at Plymouth Rock. Today, Plymouth Rock is just one of the sites that tell the story of Plymouth. When you visit our Town, you will learn about more than the pilgrim voyage, you will learn about our diverse and unique community. ” (emphasis mine)

Even the unofficial town website doesn’t have any history, but they do have another one of those little boxes. They aren’t warning us about hate. It tells us about International Day of Climate Action! (exclamation mark theirs).

But there is hope! (exclamation mine) The following quotes are from an article from the Plymouth Guide titled Putting the Thanks back in Thanksgiving – New book embraces treasured Pilgrim saga.

Hooray for the Plymouth Guide.

“Strangers and Pilgrims, the 928-page history of the Pilgrims by Jeremy Bangs, explores the religious and political foundations of the Pilgrims in England and Holland and finds historical basis for much of the treasured Pilgrim tradition.”

“Bangs, for instance, points to the false notion that the Pilgrims never referred to themselves as Pilgrims. While some have suggested the name was invented in the 19th century, Bangs said the title of his book, Strangers and Pilgrims, comes from a quotation published by Robert Cushman in 1622.”

“Bangs said he has no stake in how the story plays out, but admits he is amused to see so many of the original notions about the Pilgrims have proven to be more or less accurate.”

If I had it to do all over again, I’d still go through the exhibit, because it does contain the actual belongings of the Pilgrims which is incredible to me, but I’d ignore their little plaques signs and explanations.

The swords and furniture were interesting, but what I really was drawn to was a little doll, carried on the Mayflower by Mary Chilton. How in the world could something as fragile as that rag doll survive almost 400 years? I don’t know, but I’m so glad it did. I can’t find a photo of it, either on the Pilgrim Hall website or doing image searches. If anyone knows where there’s a picture of it, please let me know. I did a rough sketch and made a few notes, but it’s hard to tell anything about it. The description said it was made from wool, linen and cotton.

I wonder who made it. Mary? Her mother? In England or Holland? Maybe on the Mayflower itself.

As a lover of textiles, I consider it a real American treasure. 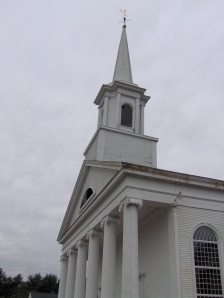 In nearby Middleboro is the First Congregational Church

organized in 1694 by the children of the Mayflower Pilgrims. 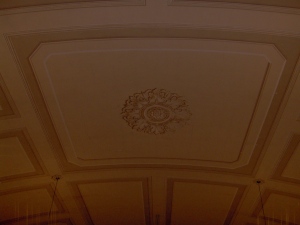 The current structure was built in 1828.

Across the road is an old cemetery. Some thoughtful person had placed flags on the graves of U.S. military veterans.

This headstone marks the grave of a Revolutionary War soldier.

This is what a cranberry bog looks like. I think they’re beautiful.

And incidentally, if it’s a can of Ocean Spray cranberry sauce that you open on Thanksgiving, you might be interested to know that O.S. is not a corporation – it’s an agricultural cooperative of the growers. If you ever find yourself in Middleboro or Lakeview, Massachusetts, give yourself a treat and go see the Ocean Spray headquarters. A winding drive, the little bridge over the stream with swans swimming on it and the white colonial style building, it is the nicest business office I’ve ever seen.

Here in our region we have Big Lot stores, and they’re pretty good, but I’ve never seen anything like Ocean State Job Lots. I could spend hours in that store. Just take an extra suitcase and a little extra cash is all I have to say. I bought everything from poppy seeds to gourmet snack items to dishes to stamp pads to tools and blenders in there – all at very good prices.

Going into Benny’s in Raynham, Massachusetts was like time travel for me. In 1950’s and 1960’s Tulsa, we had OTASCO stores (Oklahoma Tire and Suppy Company). Benny’s is so like them I could’ve believed I was a kid again. From the traditional looking shopping center and sign out front to the smell when I walked in the door, I felt like I was in a time warp and I enjoyed every minute of it. I actually did a lot of Christmas shopping there, too. If I lived in that area, Benny’s would be one of my regular stops.

Coming back around to the history of the region, the people of New England are so blessed to be surrounded by history everywhere;this region is absolutely rich with roots in our country’s founding and early days. I wish New Englanders viewed that as something to be treasured rather than something to be embarrassed about.