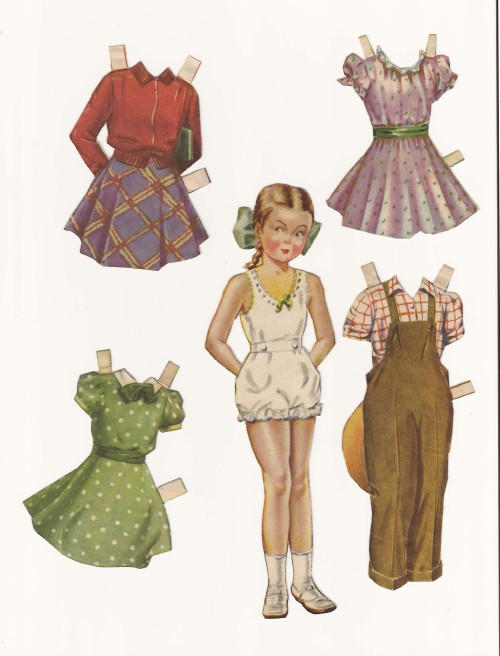 I bought her a few years ago from an ebay seller. After buying other paper dolls from her, I wrote her inquiring about odd lots, incomplete sets, even dolls without clothes and vice versa.

This 1940s girl was one of those purchases.

Very sweet and I just love her shoes.

As near as I can tell, Peg is what’s written on the back of the doll.

Was that the name of the doll, the little girl she belonged to, or both?

Among serious paper doll collectors, I’d be considered a rank amateur. And that would be accurate, because I don’t collect things that I think might become valuable someday.

First, I buy what I can afford. No matter how much I may want something, I simply won’t buy it if it’s not affordable now.

Second, my favorites are replacements of what I had when I was a child and foolishly (arghhhh!) took to the burn barrel right before I got married. That was stupid on many levels, one of which is that I’ve forgotten several of them. Seeing paper doll clothes sometimes triggers a memory even more than the doll itself. I didn’t have all that many paper dolls, because even though they were cheap (the typical price was .25 for a package), most girls I knew didn’t have lots and lots. We were not an over-indulged generation. (I had one Barbie and was thrilled to have even that.)

Third, I prefer to buy vintage, and pre-loved (use, played with) dolls and/or their clothes. Although I do have several books of new ones, I get the urge to get out the scissors. I usually don’t, but I want to. There are several booklets of Dover paper dolls in my box, and a few from other places (mostly museums, like the Bath Costume Museum) and they all remain uncut.

The only uncut vintage book I have are these Doris Day, 1955 issues by Whitman. I bought them back in the early 1990’s at an antique store in Kingwood, Texas and I paid way too much for them. Paper dolls were hard to find. This was before anyone except hackers and professionals had even heard of the internet. Now anyone from anyplace can post them and they’re more affordable (which is great). In fact, the prices have come way down (probably due to their ready accessibility). About 1999, I bid on an old set of Lucille Ball paper dolls on ebay. Chagrin prevents me from disclosing how how I bid, but let’s just say that it was well below the $160.00 that was the winning bid. Those same dolls can be bought now for far less and many laser copies are available, too.

Anyway, in the case next to the Doris Day set, was one of Elizabeth Taylor from the same era. They were priced a little more and since I just like Doris better than Elizabeth, I bought them.

Now it’s 17 years later, and they’re probably worth about the same as what I paid for them. Which, all things considered, isn’t really all that bad. It’s a better investment than that lousy Mexican meal I had in Kingwood.

*Update: April 20, 2011 – When enlarged, the paper dolls get very pixily and unpleasant. I tried scanning them in on the highest resolution setting I could, and it didn’t change them at all.